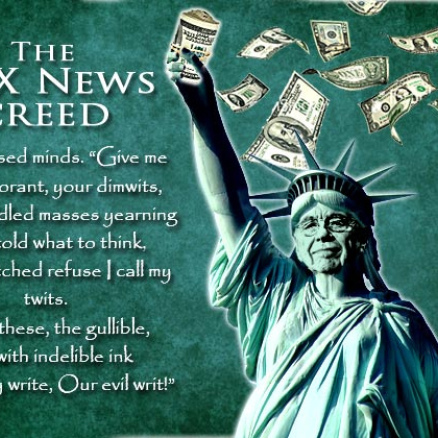 First, and foremost, all right-wing politicians are good for the country, and all liberals are bad. Republicans are ‘God fearing’ men and women who place family values first. Liberals are godless heathens. (I’m not making this shit up.)

Second, anything goes. The goal of every fake-journalist is to increase viewership, and the larger the audience, the bigger the profits. Advertising means money. The truth is not important; sensationalism increases the number of viewers who are turning off other “news” networks and moving to Fox. (Remember the ‘never-ending’ story about a missing white, wealthy teenager, Natalie Holloway?)

Murdoch and Ailes understood one simple fact: the American people are the least informed voters in the world. They are easily brainwashed. Make up outrageous lies and conspiracy theories and millions of Americans will never watch another “news” network.

All of this worked very well until Barrack Obama became our nation’s president.

Slowly but surely Fox began to implode. More than 25 women working at Fox accused Ailes of sexual harassment. He was eventually fired. Next came Bill O’Reilly. O’Reilly was a talented liar who survived with lies about his journalistic accomplishments for years. Once again his sexual deviance cost him his job and Fox its number one personality. Next came Megyn Kelly. Fox’ number one female broadcaster was one of the women who made claims against Ailes. She left Fox seeking greener pastures. Today she is out of the business.

Along came Donald John Trump. As he began to win primaries, Fox’ management made a huge decision. Their support moved from the few remaining true Republicans and placed their support directly behind the most unqualified candidate in history. Although he was openly a racist, a misogynist, and a xenophobe, he was their candidate.

Sean Hannity quickly stepped up to become Trump’s biggest supporter. He was not afraid to kiss Trump’s humongous derriere multiple times each day.

Jealous of Hannity’s “position” in Trump’s world, Tucker Carlson, Laura Ingraham, and Jeanine PIrro “tried harder.” All four began to compete with each other to find the most ridiculous and facetious lies in support of the worst illegitimate president in history.

2020 has not been a good year for the orange buffoon in the White House or Fox. Trump’s choice to ignore a probable health crisis and failure to lead our nation in the fight against the corornavirus resulted in steadily falling poll numbers. Every demographic began to desert the most ineffectual man to ever defile the West Wing.

This was only the first of three crises; each of which would expose Trump’s inability and unwillingness to lead America

When George Floyd was murdered by a cop in Minneapolis on May 25th, his death sparked the rise of the Black Lives Matter movement and it continues today. Black men and women were joined by their white, Hispanic, Asian, Islamic, and Jewish brothers and sisters as protests spread around the world.

Trump failed to aid Fox’ paid liars. His position as the leader of white supremacy in America was no longer questioned by any real American. However, in a desperate effort to aid Trump’s reelection bid, Fox chimed in, in support of Trump’s racist and fascist actions. Together they supported the existence of systemic racism in law enforcement. This wasn’t enough for the orange buffoon.

On June 1st, Trump decided that he needed a “photo op.” Hundreds of peaceful protesters gathered just outside the White House fence in Lafayette Park. Trump hastily composed a small force of “storm troopers” which included military personnel, and Capitol police. They led Trump and his entourage through the park, firing rubber bullets and releasing tear gas canisters into the crowd in violation of their first amendment rights. When he arrived at St. John’s Episcopal Church, he held up a bible; the first in his demonic life. The Trump Klan’s only god is money.

Just days ago Trump sent federal forces to Portland Oregon. They arrived in unmarked vehicles and without insignia on their uniforms. Protesters were snatched off of the streets, placed in their vehicles, and taken to a federal prison. More fascism.

What did Fox do? They praised their fuhrer for his actions although state and city officials in Oregon told them to leave, and denounced Trump’s unilateral decision which ignored the authority of the state’s governor and the city’s mayor.

The third crisis happened when The New York Times and CNN exposed the existence of an effort by Russia’s GRU to offer a bounty to the Taliban in Afghanistan for each death of an American soldier.

Although he first learned of this atrocity, a declaration of war, in March of 2019, he continues to call this proven fact a ‘hoax.’ “Heil Putin!”

Is Fox racist? Not only are they racist, they are homophobic, sexist, Islamophobes, and choose to ignore the fascist in the White House.

If you are a fan, you are too ignorant to be allowed to vote.

My eight novels, including “Down from the Mountain,” are available on Amazon’s free Kindle app

My books are available at “James Turnage”