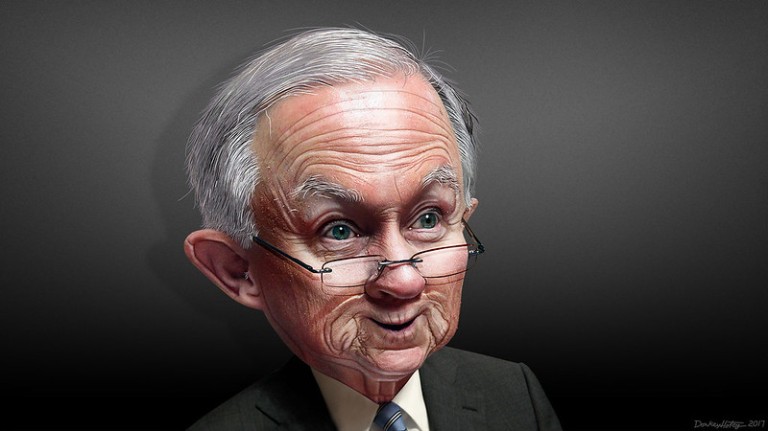 This article focuses on the relationship between Jeffrey Beauregard Sessions, and Donald John Trump. I don’t believe that either of them is qualified to be in government, nor are they good and honest men. Therefore, this is about one, obese, orange man who cares about no one but himself; the story behind the story.

When Trump declared his candidacy for the Republican Party’s nomination in June of 2015, as many as 90 percent of all Republicans rejected the failed businessman. The first member of the GOP to fully endorse Trump was one of the Senators from Alabama, Jeffrey Beauregard Sessions. He worked on the orange man’s campaign, and was his first cabinet nominee: Attorney General of the United States.

Sessions may have a white, hooded robe in his closet, but he honored the responsibilities of his job. First he refused to fire FBI Director James Comey. When Robert Mueller was appointed Special Investigator, and the investigation into Trump’s collusion with Vladimir Putin during the 2016 campaign escalated, Sessions was ordered to fire Mueller. Once again he declined. Then he took the rightful step to recuse himself from the investigation as required by ethics laws.

The baby in the White House was livid. By November 7, 2018, Sessions was gone from Trump’s circle of sinners; another casualty from reign of terror of Donald Trump.

Sessions continued to support the orange baby. His loyalty was not returned.

When Sessions decided to run for the Senate once again, Trump supported his opponent in the Republican primary, Tommy Tuberville. A runoff between the two men seeking the seat from Alabama will be held this Tuesday.

Sessions remained loyal to Trump until Donny Boy made the following statement.

Sessions’ rebuke came after Trump called for Alabamians to vote for Tommy Tuberville, calling the former coach a “winner” and Sessions a “disaster who has let us all down.”

“I’ve taken the road less travelled. Not sought fame or fortune. My honor and integrity are far more important than these juvenile insults. Your scandal ridden candidate is too cowardly to debate. As you know, Alabama does not take orders from Washington,” Sessions fired back.

“3 years ago, after Jeff Sessions recused himself, the Fraudulent Mueller Scam began. Alabama, do not trust Jeff Sessions. He let our Country down. That’s why I endorsed Coach Tommy Tuberville (@TTuberville), the true supporter of our #MAGA agenda!” Trump tweeted in May.

Tuberville’s only qualification was as the head football coach at Auburn University. He fits well in the Trump administration.

The truth is that no Republican is qualified to win in November. The Trump Party has failed all 330 million Americans. Doug Jones is the Democratic incumbent. He would far better serve the people of Alabama than either Republican who would be another Trump puppet.

I beg the people of Alabama to do the right thing; Republicans have become the enemy of the people.

My eight novels, including “Tales from Between the Sheets,” are available on Amazon’s free Kindle app