I have labeled the Trump Klan many things, but the one that most accurately describes Donald Trump and his spawn is “white trash with money.” A single example of how callous and self-serving the Trump Klan truly is, is the single fact that they have never donated a single dollar to a charity. They have no concern for the less fortunate in America. For Donny Jr. It’s more important to kill defenseless animals. For Eric, I have no idea what Eric brings to his Klan. For Ivanka, it’s creating an illusion that she is an intelligent, glamorous New York socialite.

White House aides refer to Ivanka as “the Princess Royal,” based on the way she acts in the West Wing.

First, everyone must know that Ivanka’s outward appearance is a facade: she is her father’s daughter. She talks a big game but the truth is she cares only about herself. From day one, regardless of the latest crisis created by her mentally challenged father, she continues to live a life of luxury and privilege, much of it at taxpayer expense.

Words mean nothing, and if they come from the mouth of your illegitimate president’s daughter, they are probably lies. Outwardly she claims to support women, human rights, and the basic principles of our founding fathers. However, she continues to support and even brag about every unconstitutional action by her father, negating every word which comes from her painted lips. 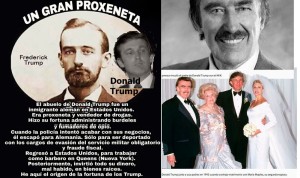 The truth about the Trump Klan, beginning with Freidrich Trump, who first came to America from Germany as “Freidrich Drumpf,” not a single member of the Trump Klan has accomplished something of value for our country or our nation’s people. History proves that they are a racist, self-centered family, and will never serve their nation’s people.