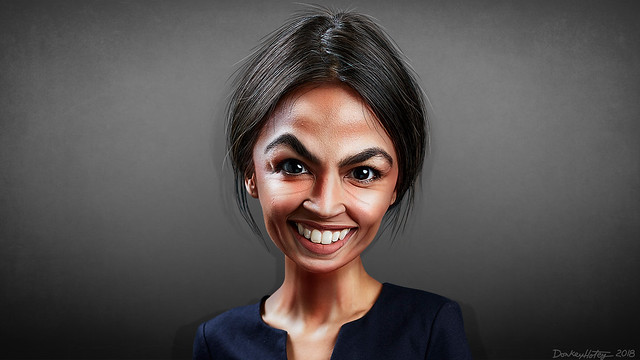 Politicians are infamous for talking a lot and saying nothing. We hear “hot air” from your illegitimate president nearly every evening, as he drones on and on about what he wants to talk about, not what the American people want to know, or directly answering the questions from the press corps.

Alexandria Ocasio-Cortez represents New York’s 14th district in the House of Representatives. This district is one of the hardest hit by the coronavirus. It is primarily populated by African Americans and Hispanics.

AOC, as she is known, has been fighting for fair treatment for minorities since the beginning of this pandemic. They are desperate for healthy food, and to find a way to pay rent. She is also fighting to save small businesses in the area.

Funded by small donations, she and her staff prepared hundreds of packages of food for those in need at her office in the Bronx. When the care packages were completed, she joined her staff as they were safely delivered door to door.

I haven’t heard anything about the kindness of loudmouth liars Jim Jordan, Devin Nunes, Kevin McCarthy, or other Republican members of the House. They are too involved in efforts to protect their impeached president and criticize the efforts of Speaker Nancy Pelosi to ensure that the stimulus money is distributed fairly and as quickly as possible; in other words, her job.

If you’ve read this before, I apologize.

The first year I was eligible to vote was 1967. I despise political parties and knew that I would be an Independent. I would always vote for the man or woman I deemed to be the best candidate regardless of party affiliation; the individual whose policies were closest to my own.

For example, in 1980 I voted for Ronald Reagan. When he ran for reelection in 1984, I voted for Walter Mondale. I believed Reagan’s promises in 1980, and some of those promises were kept, However, by 1984 he had proven himself the enemy of the working class. His economic policy of “trickle down economics” had failed miserably. When he left office in 1989, the unemployment rate was nearing six percent and rising, and the national debt had reached 2.85 trillion dollars: an increase from 997 billion dollars.

I realized that the Republican claim of ‘fiscal conservancy’ was nothing but ‘bullshit.’ The truth is, they are the party of big business and have been since 1981 when Reagan greatly reduced the corporate tax rate and the maximum tax rate for the super-rich. Honestly put: Republicans are liars.

America needs many more men and women in Washington like Ms. Ocasio-Cortez. She is young, energetic, even tireless, fights hard for the American working man and woman, and is realistic about the future of America. Unbridled capitalism has created a growing income inequality which will destroy our economy. It has made it nearly impossible for 50 percent of our nation’s people to receive adequate healthcare or attend our colleges and universities. These situations are extremely harmful for the future of our children and grandchildren.

My novels are available on Amazon