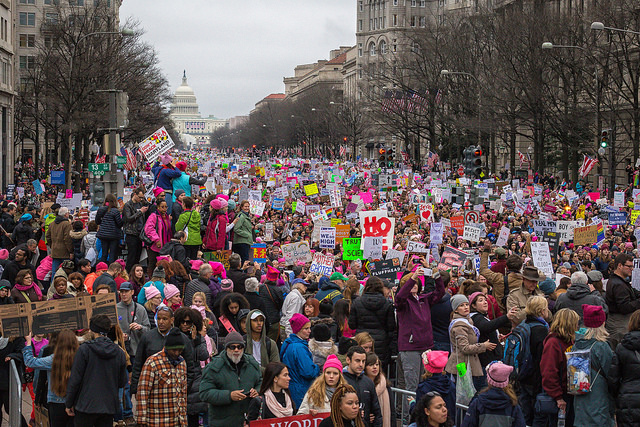 I consider myself to be very lucky. For as long as I can remember I have been in the company of women. In my late 20’s I went to school and became a hairstylist. I would be lying if I said I had thousands of clients; I had thousands of friends. I realized that women were superior to men. They have a wide variety of interests and when a woman is interested in anything she wants to learn everything possible about the situation; whatever that might be.

Most men are incapable of change. This fact is based on one fault; the majority refuse to admit their mistakes. This is at the core of why the Republican Party has failed. Like their leader, the orange, man-child in the White House, they believe they are always right, although they oppose the American people on most of the important issues.

Nearly 50 years ago a movement began which would guarantee all women full equality with men. What initially began in 1923 was fulfilled in the 1970’s. A Constitutional amendment was placed before congress and the American people called the ERA; the Equal Rights Amendment. Tens of millions of women were disappointed when it failed.

Although the ERA passed in congress, it failed to capture the 38 states needed to add it to the Constitution. In 2020, a revised ERA amendment will be placed before the people once again.

Sadly, a situation which resulted in its failures in the 1970’s is raising its ugly, old, white head once again in the third decade of the 21st century. Three very red and backward thinking states are planning to block its passage; Alabama, Louisiana, and South Dakota. Republican politicians from these three states claim that “it is not necessary,” and they are supported by other right-wing male supremacists who continue to believe that women are inferior to men and must remain so.

Okay, here’s the truth. Today’s Republican Party in name only is dependent upon the support of the Christian religious right. The real reason GOP politicians oppose the ERA is because women would be guaranteed the right to decide the mental and physical health of their own bodies. These very old, white men refuse to surrender their control over the reproductive health of all women.

Someone needs to explain the truth to Republicans and their bigoted religious friends, the CRR, that the Constitution protects the rights of every woman in America to make choices about her physical and mental health. Equally important is the fact that the first amendment specifically prevents influence over our government by a single religion. Every day Republicans allow the CRR to interfere in their decisions they are violating the Constitution; which has become a standard for the right-wing.

Every bill which would support complete equality for women has been rejected by Republicans. Their war on women not only continues in the 21st century, it has escalated. Now that they have a leader who supports their beliefs in white supremacy, Islamophobia, homophobia, and misogyny, they openly reject the importance of women in our society.

Finally, I want to repeat myself. Millennials are the largest voting bloc in America. Women continue to dominate our population; 51-49 percent. If these two groups go the the polls in large numbers, they can control the results of all future elections.

Time for change; time for America to grow up and join the rest of developed nations. The future of America must no longer remain in the control of backwards thinking old, white men who call themselves ‘Republicans.’ This is our country, not theirs.